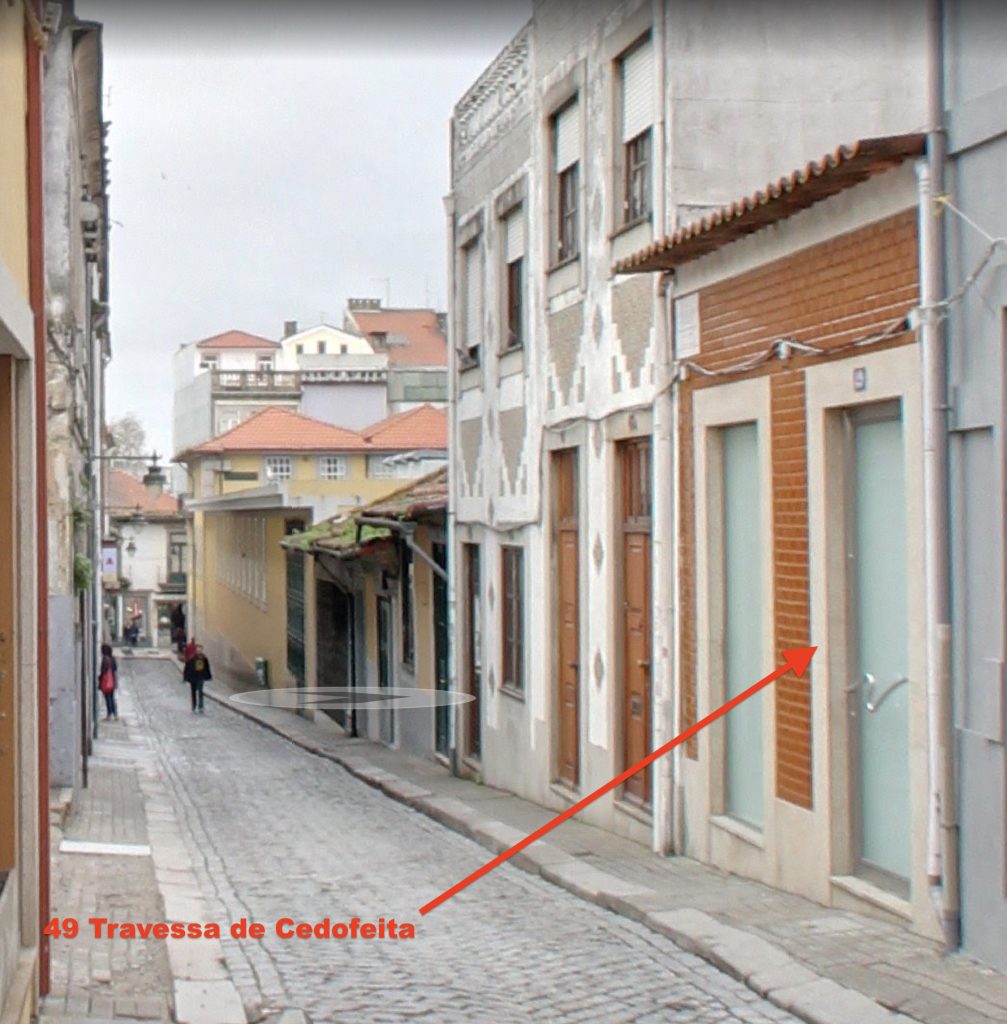 We rented an apartment on 49 Travessa de Cedofeita in Porto, Portugal, and lost a lot of money because the owner, MARCELO EDUARDO DE AGUIAR FERREIRA, refused to give our money back when we were forced to move out. What happened? Let me tell you.

Bottom line, I think, is we were too optimistic. We thought we would have a great time, everything was going to go smoothly and in any case, we were not settling in and only staying for two months. Unfortunately, we ran into some trouble right from the bat.

We had carefully selected our rental to be in the center, have two bedrooms (I snore loudly) and have a garden so we didn’t have to go out to a park three times a day to have the dog pee.

We found a place on 49 Travessa de Cedofeita, across from the Rat and Cat beer specialist and next to the lovely restaurant Coupage 51. The owner, Marcelo de Aguair Ferreira, also rented us a garage about 15 minutes walk away. We paid one month up front by bank transfer. That is: €850 for the apartment and €150 for the parking. Just days before our arrival, the owner gave us some bad news. He had lost  a court case againt the university, who were claiming ownership of the garden. So we would not be able to use  it. So we immediately and frantically started asking around on the Facebook-group Expats in Porto about parks in the neighbourhood.

I told Marcelo, OK, it being too short notice to find something else, we’ll just arrive on Sunday and see if we can manage. Upon arrival, the lady doing the check in asked us to pay a caution, an advance on the electricity plus the tourist tax. Another 350 euros. I paid, because she was only doing her job and what’s more… where could we go?

49 Travessa de Cedofeita had some issues

Once settled in, we found that the lack of garden was not the only thing wrong with the place. For instance, none of the walls separating the different rooms went all the way to the ceiling! They were all open. Which means you could hear every cough and sigh from any place in the apartment everywhere. My wife and I have been together for 30 years, so a bit of farting and snoring does not really upset us anymore, but still, it kind of defeated our purpose of having a sound proof second bedroom.

What’s more… the place was COLD! There were glass ceilings in the main room and the bathroom, and hardly any insulation. In the shower/toilet room you could hear people talking and smell the kitchen of the restaurant next door. Someone had pushed some bubblewrap in the holes between the roof and the wall, but this was not enough to keep the warmth in. It was freezing. Normally, you would just heat one room, but did I mention the rooms had no walls?

The owner told us to use the electric radiators, but I quickly calculated that 5 radiators of 1000kW = 5000kWh x 25 cents would be €1,25 per hour just to get the place less unconfortable! Being at home most of the time (this was a work-at-home holiday, whwre I would still do the admin work for Immogo), that would amount to about €25 a day!

This, together with a lot of other little things I will nog go into now, made us decide to go look for another place. I told the owner this on tuesday, we found a much better place on wednesday (with two separate bedrooms plus a small garden and a private parking spot on Praça Pedro de Nuñes, near the top of Rua de Cedofaita ) and moved out on thursday. All in all, we stayed for four days.

When we moved out of 49 Travessa de Cedofeita, the owner told us to quickly give back the keys of the house and the garage because it was a very busy time.

Unfortunately, my wife had gotten sick. A bad flue she picked up in the Siberian Travessa de Cedofeita. In the new apartment, she stayed in bed sweating and shivering for a full three days. I kept in touch with the owner and finally got him to commit to a financial settlement. Well….

He decided unilaterally that he would not give our money back. What’s more, he took the security down payment and deducted the rent for the four days we stayed there plus the costs for a full month internet (€44,90) plus the electricity and water for the four days. We paid in €350 and Marcelo was not willing to give us back ,ore than €91. Keeping €260. Plus the €1000 euros we already paid for the 1st month rent. So these four days in a frozen-over hell had cost us €1260,- !

His excuse? We cancelled, we didn’t accept his alternative places and he would not be able to rent out the place because ‘all the calendars are closed’.

There’s not much we can do about it. Except write a formal letter of complaint to the tourist office and the different rental sites Marcelo Eduardo de Aguiar Ferreira is using to advertise his ‘Cedofeita House’ at 49 Travessa de Cedofeita. Plus a couple of articles in different languages on my French, Dutch and English blogs to make sure the address of the apartment and the name of the owner will be very well found on Google. This way, even if he will not give us any of our money back, in the end HE will be the loser. Because people will understand that Marcelo from 49 Travessa de Cedofeita has taken our money and did not deliver on his promises.

Anyhow. With all this hassle, we were really fed up with Porto. The new apartment was quite nice and comfy and the owner was a dear, but everywhere we went we were cold. In the restaurant, in the pub, in the streets… COLD! There was only one thing we were really looking forward to… go back home. So we decided to do just that.

Fortunately the owner of the second place we rented was really nice about it. When we told him we would be leaving early he did agree to give us the unused part of our money back.

As I’m writing this, we are in a hotel near Périgueux, France, just 4.5 hours drive from our home. Where, hopefully, it is warm.

By the way, of you ever want to visit Porto for a couple of days or weeks, the second place we rented is a really good choice. It’s called OPO APT and has its own website here.