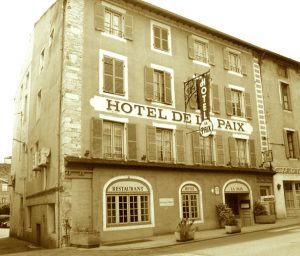 Buying a hotel or restaurant in France is easier than ever. While I am writing this, various restaurants and hotel restaurants in my touristy French town of Tournus are for sale. That is because like in many countries in Europe, and also in France, keeping the business afloat in the catering industry is not an easy job. Moreover, many French do not manage to adapt to modern marketing practices. None of the hotel restaurants that are for sale have a good website and most of them show little activity on social media. This is why they cannot compete with the more innovative players on the market, who make full use of the services of AirBNB, Bookings, and Trip Advisor. So, no other option than offering their French hotel for sale – restaurant for sale France remains.

Running a hotel or restaurant in France

Is it simply impossible to run a succesful restaurant or hotel in Tournus? I don’t think so. The potential of our town is huge. Though Tournus only has a population of 6,000, it can boast no less than four Michelin stars (one star per 1,500 inhabitants: the greatest star density in France) and has its own exit (No. 27) from the Autoroute du Soleil, at around an eight-hour drive from the centre of Amsterdam and London, and 3.5 hours from the heart of Paris. It is the ideal pit stop both for northerners migrating south, as for Parisians on their way to the Midi or skiing areas. The only thing you need to to is to advertise intelligently. And if you want to start a restaurant, you have to make sure you offer something that is different from the rest.

Syrian amateurs with their own restaurant in France

A good example is the Syrian family who – three years after they fled Aleppo – got the opportunity to take over a mini restaurant in Tournus. They mucked out the place, painted the walls, hung up some pictures of Syrian temples, and called it ‘Les Délices d’Aleppe’. The result is a full house every day, for lunch as well as for dinner. Whereas in Syria they had a very different occupation. At the same time, some of the normal restaurants – traditionally serving snails as a starter, bœuf Bourguignon and poulet aux morilles as a main course, and clafoutis for dessert- are having a hard time surviving. And of the four Kebab shops, two are about to fail, while the second pizza dealer is also struggling.

What I personally think would be interesting, is a hotel restaurant entirely in the style of the fifties, with the interior of the restaurant decorated with American ‘diner’ furniture and a nice menu with ‘slow’ fast food. Burger Bœuf Charollais Fois Gras. French Fries with a bucket of ‘Cuisses de Grenouilles’. Un vrai ‘Diner Américain vintage années 50‘…