In the Paris real estate market, high level of sales was experienced in the third quarter of 2016. House prices rose by 1.5% on average in the suburbs of Paris. According to notaires, total sales are estimated to be 843,000, which reveal 9% growth till October 2016 and a strong level of home sales in the real estate market of France. Almost the same growth level was experienced during the same period in 2015. 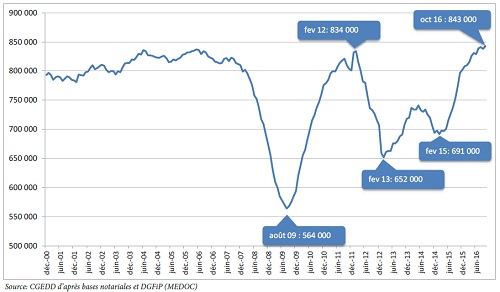 The notaires point out to the 4 most important factors associated with high level of home sales in Paris i.e. relatively lower interest rates, home price reduction, positive and successful investment policies, and offering first time buyers interest free loans. Moreover, France has a status of safe haven when it comes to dealing with real estate. It also contributed positively to high level of home sales in France.

The notaires have recently published analytical reports on third quarter house price changes in France and for every French department separately.

Although these reports do state that there is a big increment seen in house pricing in the third quarter of 2016, readers need to critically analyze all figures stated in the reports before coming to an ultimate conclusion as it’s single quarter report. Please be aware that these reports are not enough to accurately predict the state of the real estate market in France.

There is a lack of comparable transactions in the figures related to different departments. It might also be another reason that there are no accurate figures written in the reports. It can also be predicted here that prices might be falling or staying stable in the market.

However, it can be accurately considered that prices are likely to gain momentum along with some substantial divergences present in the market between urban and rural regions. The activity levels in urban areas are yet to be analyzed and reported accurately. According to notaires’ analytical reports, the urban regions don’t reflect and their real estate market cannot be compared with the home prices in the rural areas.